On Sunday, Sampdoria lost 5-1 at home to Fiorentina. Curiously, it was their second 5-1 defeat in less than a month, having also won 5-1 earlier in 2020. So that is three 5-1 games featuring Sampdoria less than two months into the new decade. Yet, since the turn of the century Sampdoria have only been involved in six 5-1 matches in Serie A, and they don’t have the best record from those games… 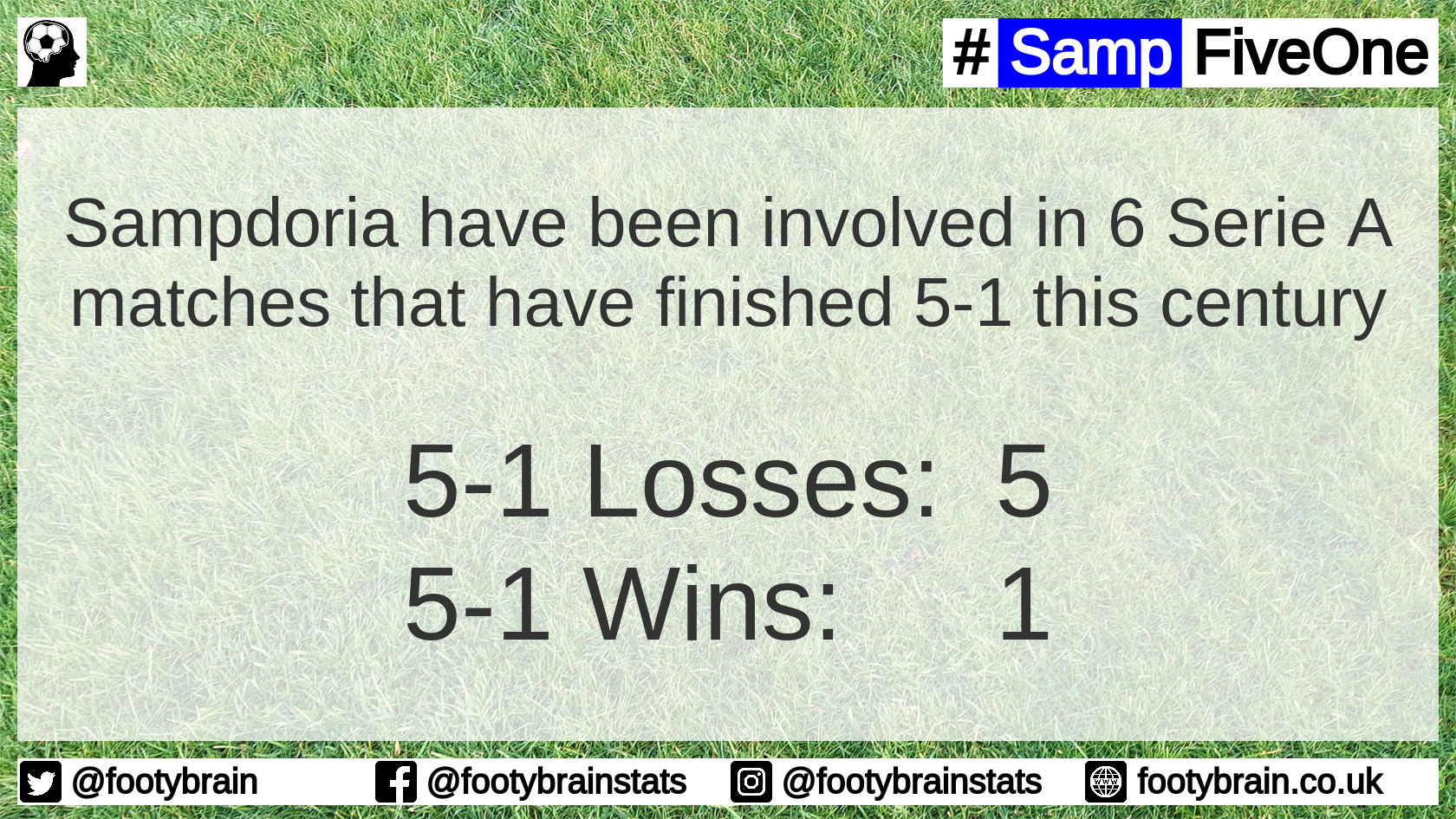 Join Footybrain in looking back at those 6 matches, as we find some interesting facts along the way. So, starting with the most recent: 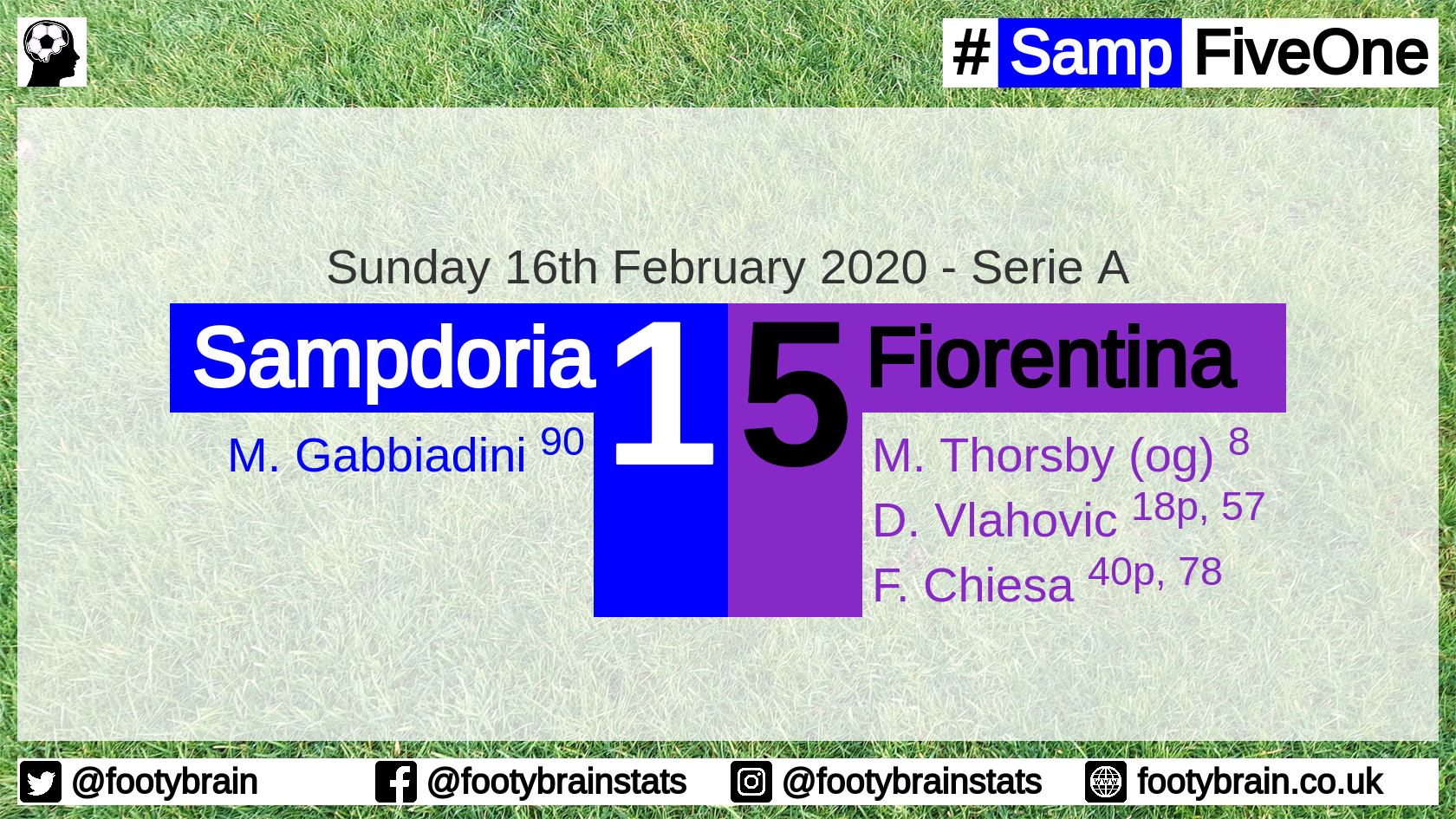 At the weekend, Sampdoria suffered their biggest home defeat since a 5-0 mauling at the hands of Inter Milan, and a Mauro Icardi quadruple, in March 2018. However this loss was a little more unexpected, with Sampdoria starting the day knowing a win would take them above their opponents from Florence. Yet the match was all but over by half time with Fiorentina 3-0 up thanks to an own goal from Morten Thorsby, and penalties from Dušan Vlahović and Federico Chiesa (whose name simply translates to ‘Freddie Church’ in English). Vlahović and Chiesa then added goals from open play in the second half, before Manolo Gabbiadini scored a 90th minute consolation to bring about another 5-1 scoreline for Sampdoria.

The name Chiesa has meaning for both clubs, with Federico’s father, Enrico, playing for both teams in his illustrious career. Enrico Chiesa (‘Henry Church’) featured for Italy in Euro 96 and the 1998 World Cup, and began his career with Sampdoria, having three different spells with the Genoans before moving on to Parma, Fiorentina, Lazio and Siena. Enrico scored well over 100 Serie A goals, scoring the most for Fiorentina with an impressive 34 goals in just 59 games. His son, Federico, is only 22, and like his father, has already played and scored for the Italian national team. Chiesa’s goals today took him to a career high 8 Serie A goals for the season:

Enrico Chiesa only scored his first Serie A goal at the age of 22 (for Sampdoria), so Federico has a far higher total for his age than his father. However, Federico has some way to go (although plenty of time) to match his dad’s best scoring seasons in Italy’s top flight:

But back to Sampdoria. The 5-1 result made it their second league defeat by the same scoreline in less than a month. No other team has lost two Serie A matches 5-1 in as short a space of time this century. However it is not the shortest across Europe’s top 5 divisions: 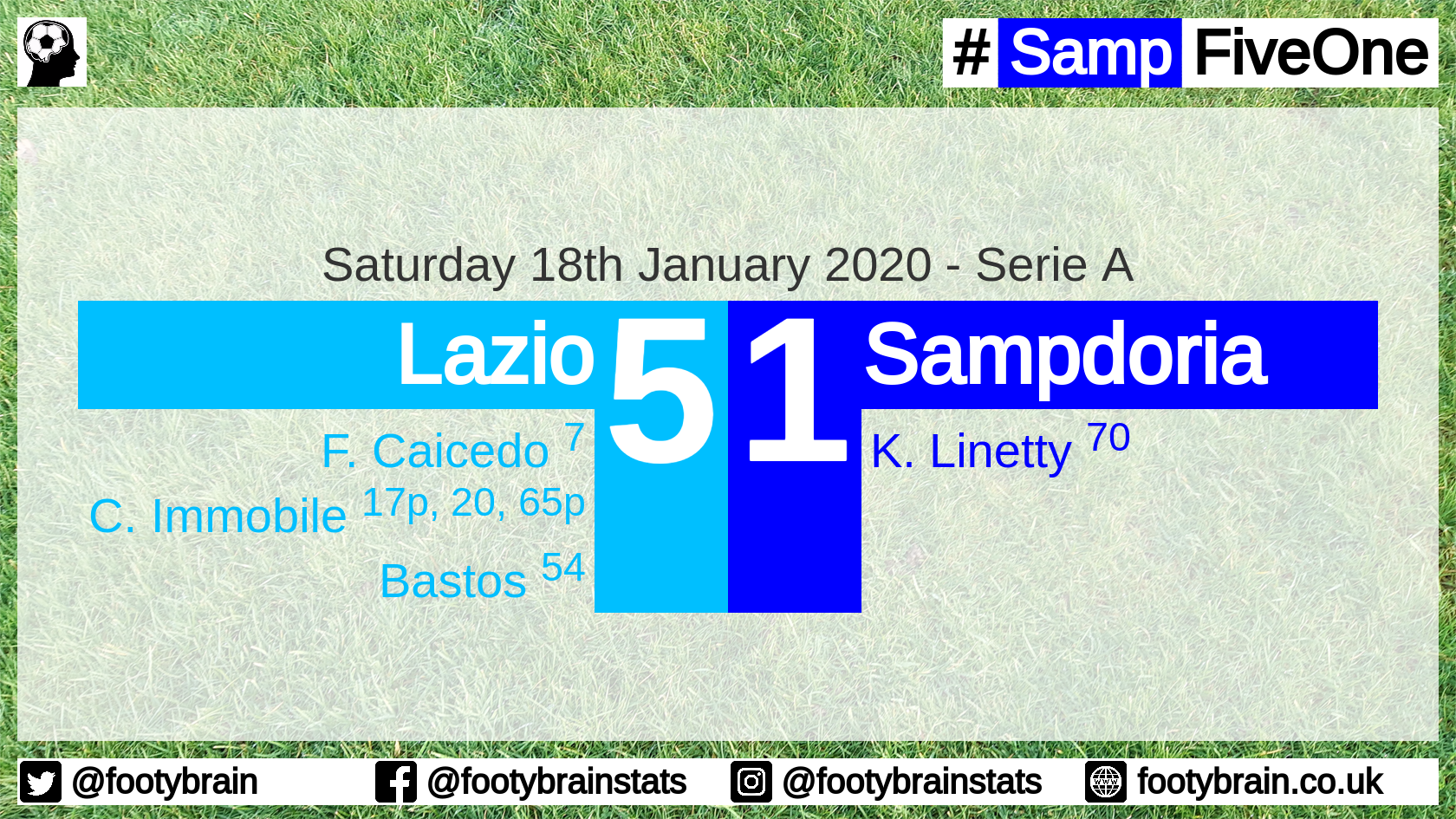 Sampdoria also fell to a 5-1 defeat less than a month ago, away to Lazio, where Ciro Immobile bagged a hat-trick. Immobile is currently the top scorer in Europe’s top 5 leagues with 26 goals, and has already matched the total of last seasons Serie A Golden Boot winner – Sampdoria’s own Fabio Quagliarella.

Lazio managed to claim another 5-1 win at the start of February, their victory over SPAL made it the shortest time for a Serie A side to record two 5-1 victories this century. However, again when looking across the major leagues it isn’t a record: 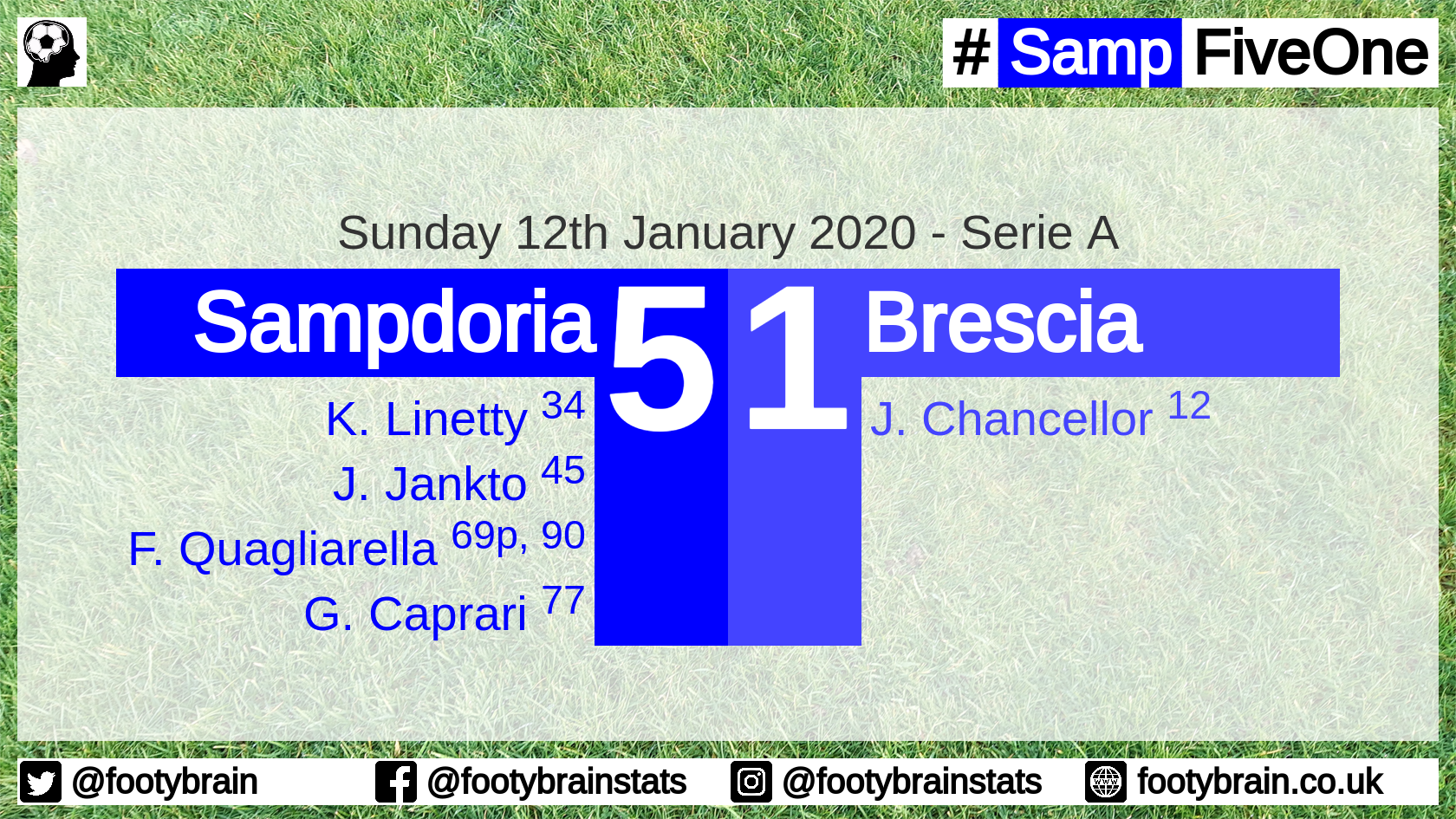 Happier days for ‘I Blucerchiati’ (‘The Blue Circles’) have already been here in 2020. Less than a week before the defeat to Lazio, Sampdoria were blowing Brescia away. Karol Linetty, who scored the consolation for Sampdoria in Rome, netted the equaliser against Brescia, who took the lead through a 12th minute Jhon Chancellor goal. Jakub Jankto put Sampdoria ahead right on half time, before a Fabio Quagliarella penalty, a Gianluca Caprari goal, and another Quagliarella strike, put gloss on the win.

Once again, this is the shortest space of time for a team to both win and lose 5-1 in Serie A this century, but not a record through Europe’s leading 5 leagues:

Interestingly, Sampdoria are the only team in this list to turn a 5-1 win into a 5-1 defeat in less than 20 days, the other 3 sides, all from La Liga, managed to avenge their defeats with a follow up 5-1 victory. 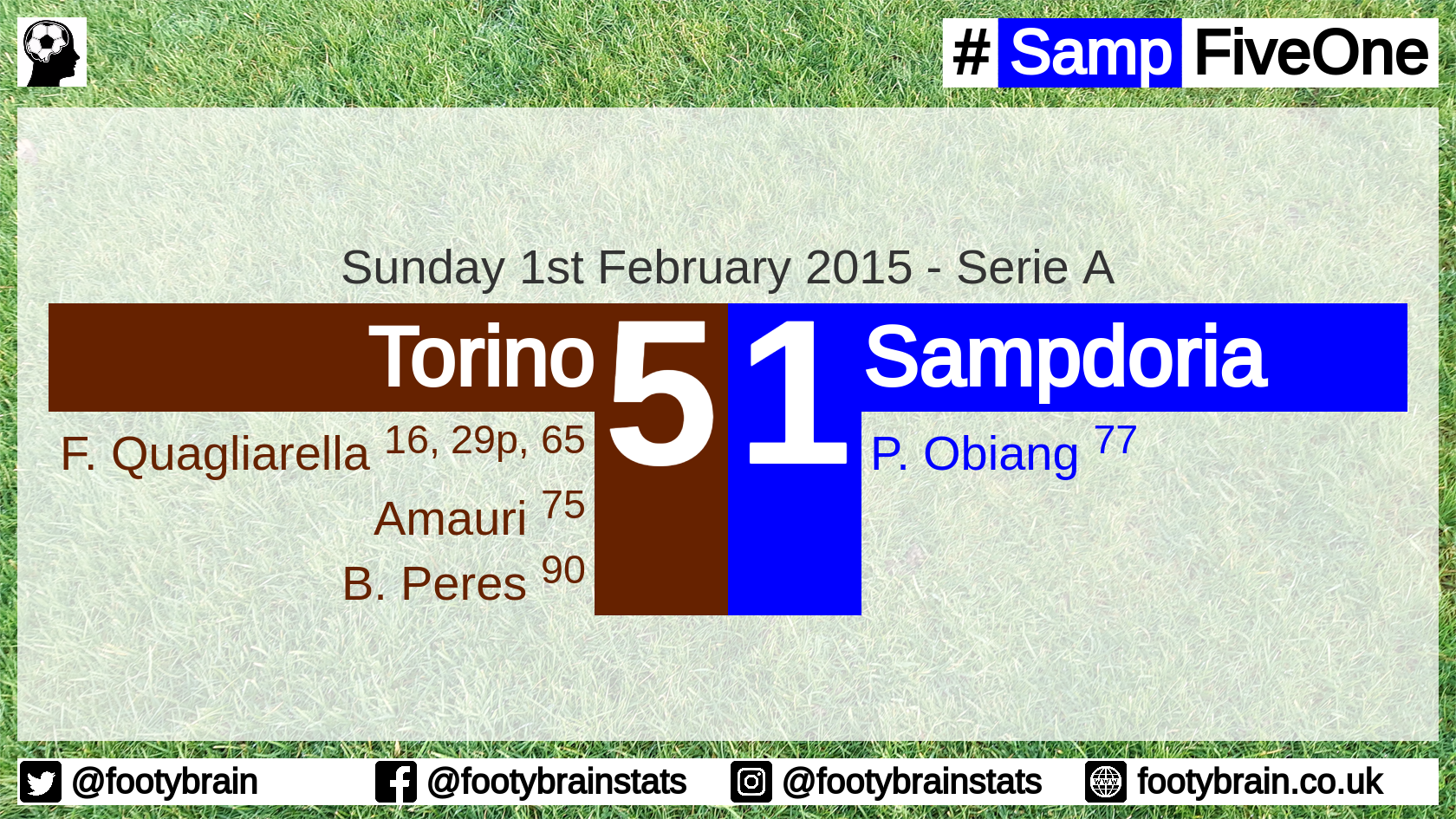 Sampdoria have already featured in three 5-1 Serie A games of the 2020s, but they were only involved in one 5-1 Serie A match in the last decade. Fabio Quagliarella may have scored 80 Serie A goals across two stints for ‘La Samp’, but in 2015 he was a Torino player. Quagliarella began his career with Torino and, like with Sampdoria, has had multiple spells with ‘Il Toro’ (‘The Bull’). He scored the opening three goals when Torino hosted Sampdoria in February 2015, one of three Serie A hat-tricks across his career. Quagliarella has also scored trebles for Juventus in 2012, and Sampdoria in 2018 (a 3-1 home win over Fiorentina). 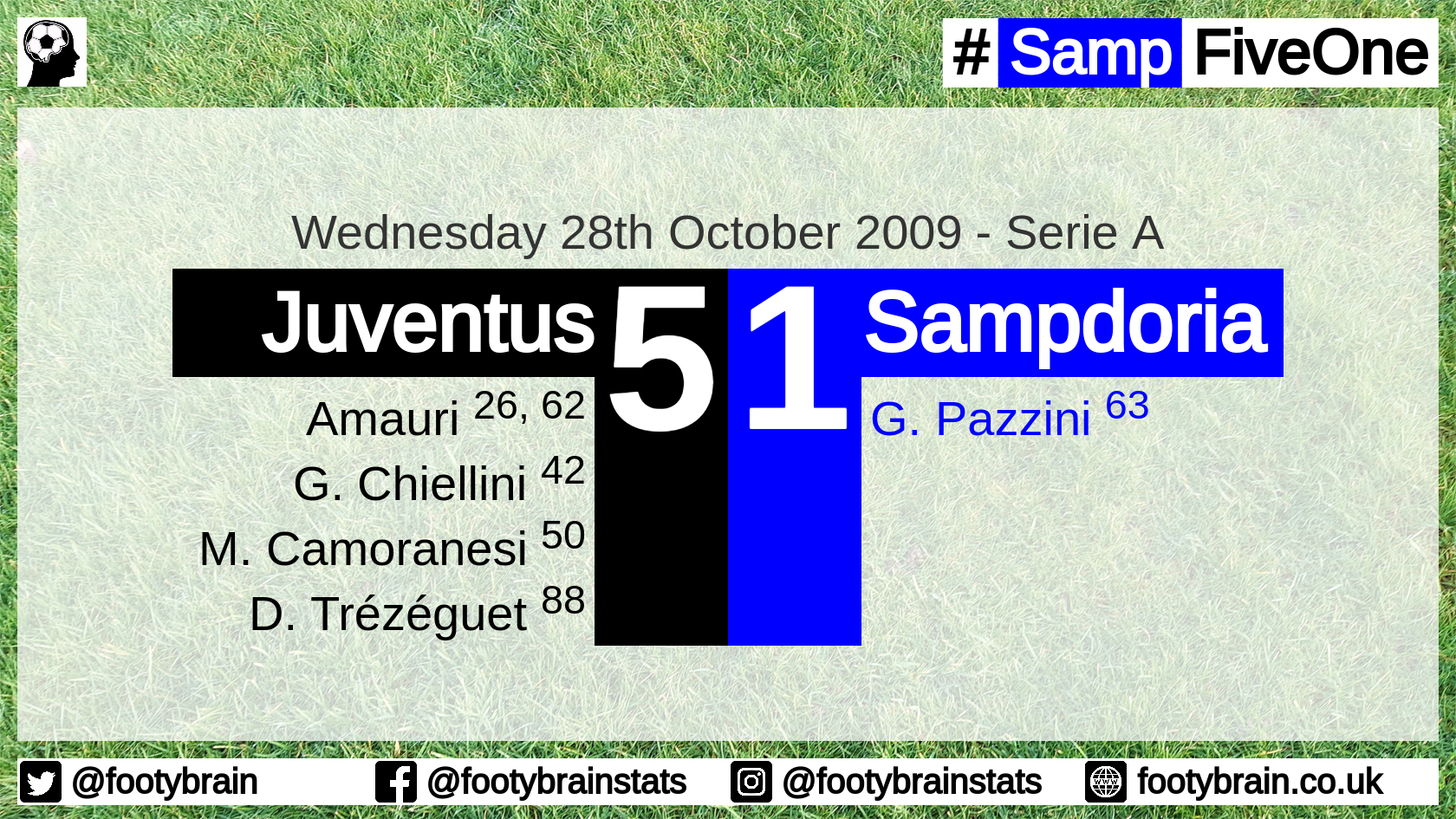 It was Torino’s city rivals Juventus who defeated Sampdoria 5-1 in October 2009. Amauri, who also scored in the Torino 2015 win, was the player who bagged a brace for Juve and opened the scoring for ‘The Old Lady’. Giorgio Chiellini, who is still playing for Juventus, grabbed their second before half time. World Cup winners Mauro Camoranesi (Italy, 2006) and David Trezeguet (France, 1998) also got on the scoresheet, with Giampaolo Pazzini netting for Sampdoria. Pazzini was enjoying his best goalscoring season in Serie A – bagging 19 goals in 2009/10. 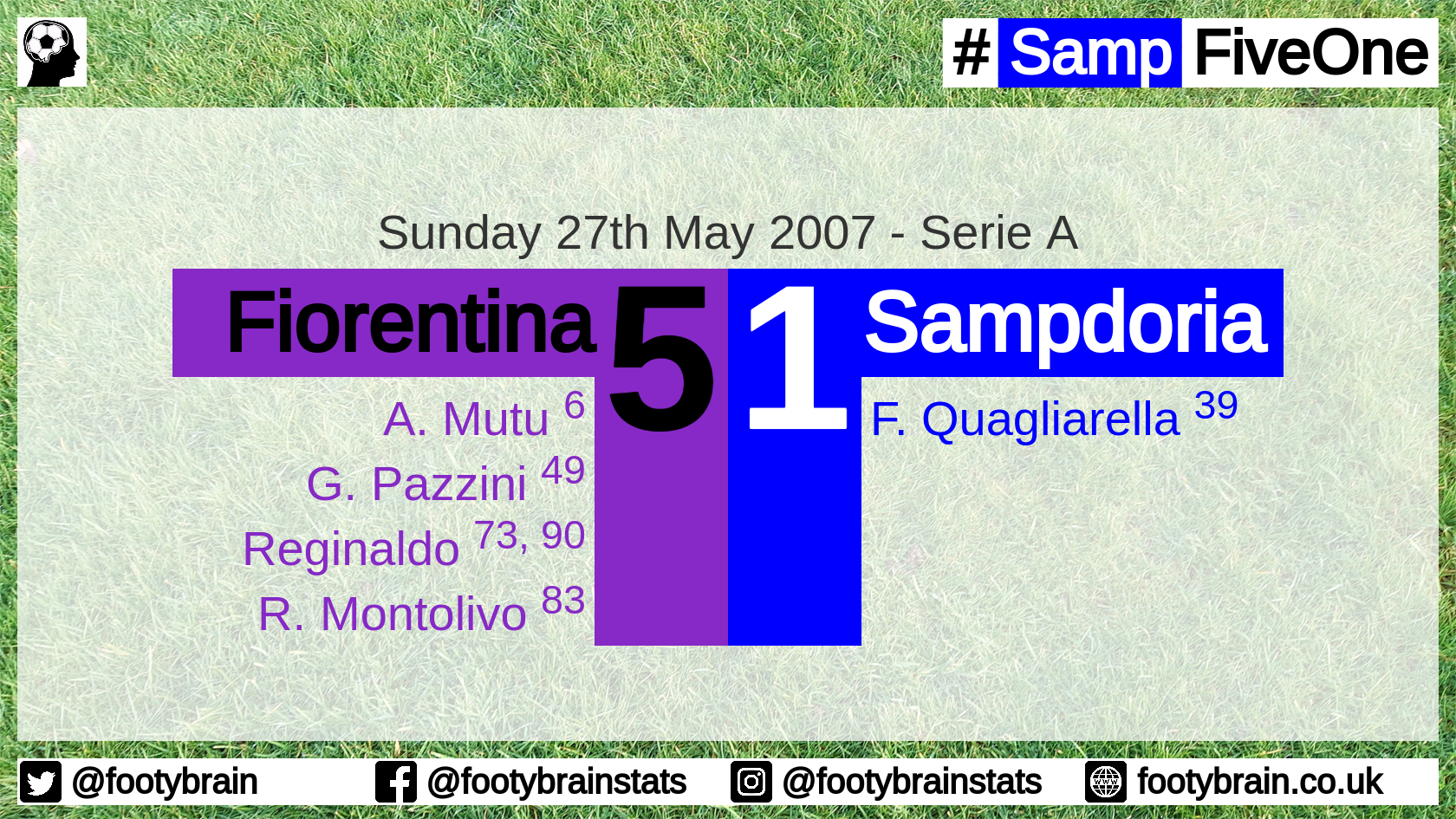 Pazzini was playing and scoring for Fiorentina in their 5-1 win over Sampdoria in 2007, putting the Florence side into a 2-1 second half lead, after Quagliarella had equalised for Sampdoria. Quagliarella was in his first spell with the Genoa outfit – a single season where he finished club top scorer. It was Quagliarella’s last appearance and goal for Sampdoria for 9 years. He left for Udinese in the summer of 2007, moving on to Napoli, Juventus, and Torino, returning to Sampdoria in 2016. Quagliarella celebrated his 37th birthday at the end of last month, but is still an integral part of Sampdoria’s squad – their top scorer so far this season. So don’t expect his second stint at Sampdoria to be over just yet and end like his first did.

What was different about Sunday’s defeat is that it happened at home in front of Sampdoria’s own fans. Indeed out of their six 5-1 matches this century, it is the only loss for the home team, making it 5-1 to the home side… 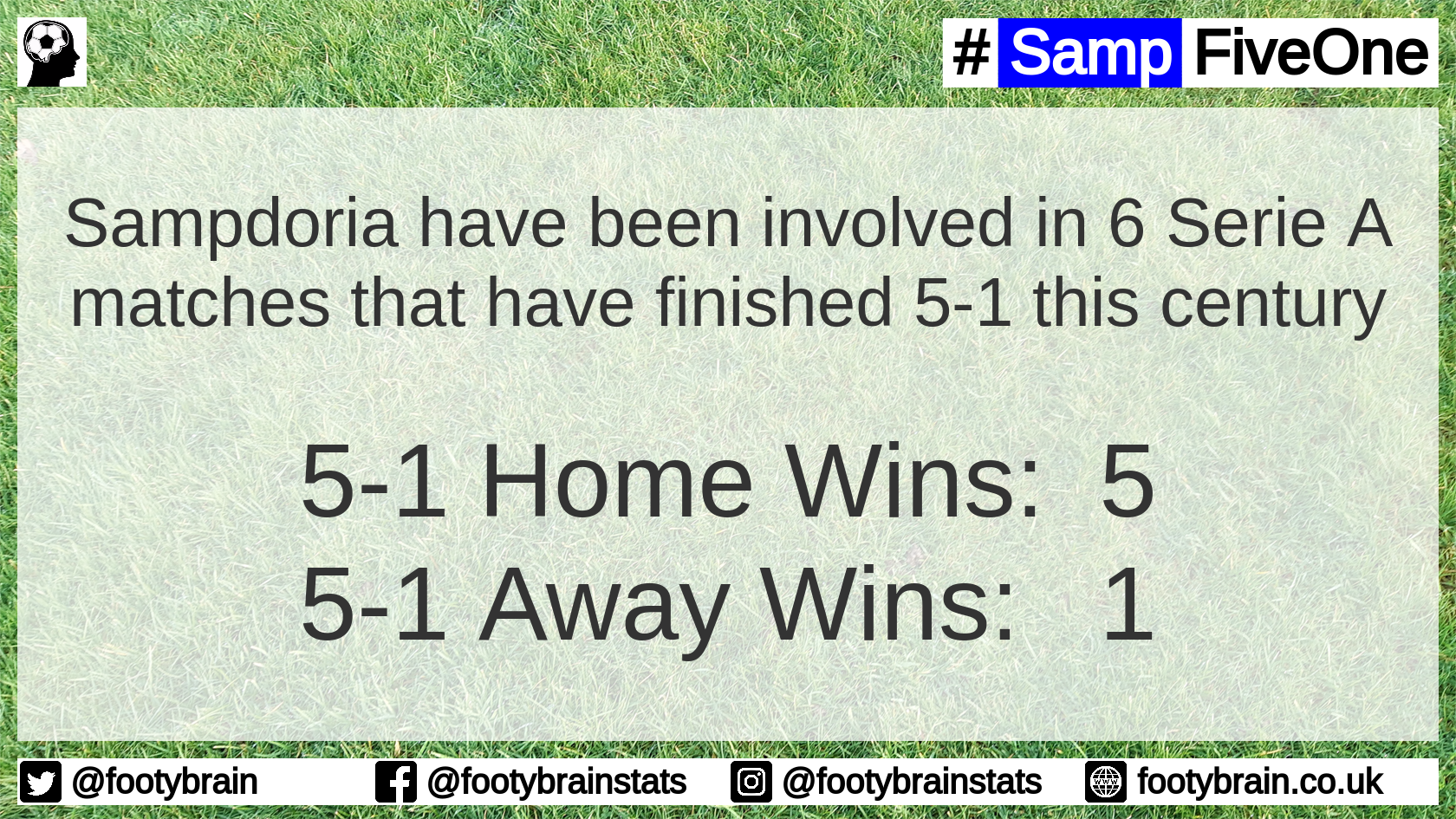